A Little Bit About Us

An independent organisation run entirely by volunteers and financed by grants from local bodies, donations and sales of publications based on the collections.  Our volunteers are always ready to share their knowledge, enthusiasm and skill.  We receive visitors and enquiries from all over the world and are delighted to help others in exploring our heritage.  This engagement often adds to the collections and our own knowledge.
Visitors to our parish and many of those folk who have recently taken up residence, have shown a great interest in the history of the rich industrial and social heritage which surrounds them.  Our aim is to collect as much information and memories as we can before it is lost in order that we can pass this knowledge on for the enjoyment of our community, visitors and future generations.

We offer a personal Research Service on any aspect of parish history - if this is something that interests you please drop us an email.
​  However, if you just want a few hours browsing through old photos etc, we would welcome you for a small donation towards our running costs. Please give us a call or visit the Archive to learn more. 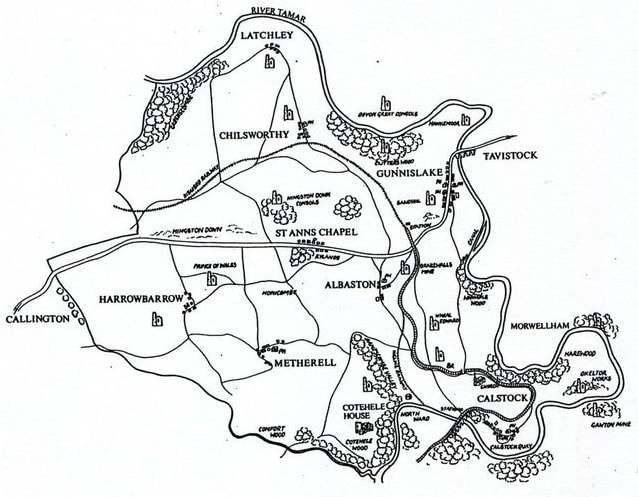 Calstock Parish Map
About Calstock Parish
Calstock Parish has the second largest population in Cornwall and is full of interest.  "Callestock" was mentioned in the Domesday Book.  Back in the 13th Century it was part of the Earldom of Cornwall and the Archive holds documents dating from that time onwards.
The parish lies deep in the heart of the Tamar Valley, an Area of Outstanding Natural Beauty and it contains seven villages and many small hamlets.  Many of these are ancient, but some date from the 19th Century when the numerous mining activities caused the population to increase seven-fold.
Historical and official documents referring to "Calstock" usually mean the Parish, and not the Town, which was named after the Parish.  The seven villages in the Parish are Calstock, Gunnislake, St Anns Chapel, Metherell, Harrowbarrow, Latchley and Chilsworthy.
Important monuments in Calstock Parish are Calstock Viaduct, which still carries the railway over the River Tamar into Cornwall, and Gunnislake Newbridge, built in the 16th Century, which carries the A390 road over the Tamar from Devon.  The Tamar Manure Navigation Canal is also a listed historic monument. Built in the late 18th Century it was designed to enable river traffic to bypass the ancient weir and access the quays at Gunnislake.
​
Photographs - You can order glossy prints from any photograph at the archive for just £3.50 plus £1 p + p (A4)