The Calstock Roman Fort - (A lot has happened since this page was published!)

Recent archaeological work led to the discovery of a Roman fort which encompasses Calstock Church.​

​The site of Calstock Roman Fort probably dating from the 1st century AD. This is only the third Roman fort to have been found in Cornwall and the first with possible associations with Roman military interests in Cornwall's mineral resources. The site is located on a spur above the river Tamar near to St. Andrew's church in the parish of Calstock, Cornwall. It was found accidently by a team from Exeter University, as part of the larger Bere Ferrers Project, investigating the development of medieval silver mines in this area. A geophysical survey in 2007 revealed the outline of a Roman fort enclosed by two ramparts and two ditches. A number of anomalies were also revealed which may be associated with Roman metalworking. In 2008 a trial trench was excavated on the site which revealed details of the fort's defences.
The fort measures circa 170m by 160m, with an internal area of circa 140m by 130m (1.82 hectares). This is much larger than the other two known Roman forts in Cornwall; Nanstallon (Monument Number 431370) and Restormel (Monument Number 432777). Two ramparts and ditches were uncovered. The outer rampart is approximately five metres wide and is constructed of clay and shillet from the digging of the ditches. The sides of the rampart were held together with timbers on both faces. Two ditches were uncovered between the inner and outer rampart with characteristic v-shaped profiles and square-cut bases which is typical of Roman military sites. They were 2.8m deep and approximately 3.5m wide. The outer rampart was also approximately five metres wide and the investigations show that it was capped with large sandstone rubble on the western and southern sides of the fort. Just outside this rampart a stone-lined furnace structure was excavated. Finds from it included Roman pottery, fragments of furnace lining and some ore and slag which suggest that Roman metalworking was taking place in the 1st century AD. A track leading into the fort was also identified. 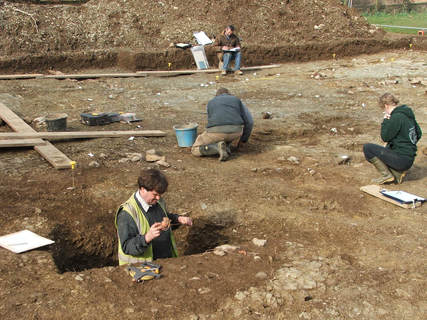