The Railways and The Viaduct

In 1859 the Tamar Coal, Manure & General Mercantile Company was formed. They had wharves, engine works and stores at Kelly Quay, Calstock (now called Kingfisher Quay). They built an incline plane from the quay up the Danescombe valley finishing 350 ft above Calstock at The Butts.

In 1862 the Tamar, Kit Hill & Callington Railway Company was formed with the intention of connecting the incline to Callington. A Bill was passed in 1864, land and rails were purchased and work commenced. Most of the finance came from outside the region as local people thought the railway was being built too cheaply. They were proved correct as the engineering problems were greater than envisaged and the contractor found himself in money difficulties. Work was halted and nothing happened for six years.

In 1869 the scheme was revived as the Callington to Calstock Railway, though in fact the line terminated at Kelly Bray a mile north of Callington. It later became the East Cornwall Mineral Railway. The line went from Kelly Bray round the northern side of Kit Hill where there was a siding connecting to the Kit Hill Quarry incline plane. There were stations at Monks Corner (Luckett), Cox's Park (Latchley) and Gunnislake. At Gunnislake there were lines going to Clitters, Pearson's Quarry and Greenhill Arsenic Works. Two saddle-tank engines pulled the goods from Kelly Bray to the top of the incline. The wagons were then let down the rope incline, two loaded wagons were pulled up as three went down. The first wagons were built by a Calstock carpenter, A.W. Williams in the wagon shed at the top of the incline. The wagons were then hauled along the quay by horses to the copper quay which was on the site of the present Calstock village hall and car park. Tin, copper, arsenic, bricks, stone and coal were carried and for the first four years profits were good. Gradually the mines began closing and trade began to decline, what was needed was a passenger service.

In 1881 the Devon & Cornwall Central Railway proposed to bring a line from the junction at Lydford through Brentor, Lamerton, Sydenham Damerel and Milton Abbot, across the Tamar above Newbridge, Gunnislake and joining the mineral railway 950 yd east from the top of the incline station. A link from Kelly Bray to Callington was also planned. After much lobbying the first turf of the Devon & Cornwall Central Railway was cut a mile from Callington. Banners were hung out and shop fronts decorated for the occasion. Military bands played and tableaux of local industries were put up. However the weather was atrocious and the real power behind the project turned out to be the South Western Railway. In a speech, its agent announced they were too busy promoting a separate line to Plymouth and so the line to Gunnislake and Callington would have to wait. 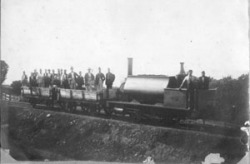 In 1883 the Plymouth, Devonport & South Western Junction, (a subsidiary of the South Western) was authorised to build a line from Lydford, through Tavistock, Bere Alston and on to Plymouth. A junction with the East Cornwall Mineral Railway was to be made near Calstock. The line was finally opened in June 1890 and the East Cornwall Mineral line taken over in 1894, though it continued as a mineral railway until 1908 when the viaduct over the Tamar at Calstock was completed. By this time, carriage of mineral ore had virtually ceased and bricks, granite and farm produce were the main output. Coal, lime and manures being imported into the region. A wagon hoist was built on the viaduct to hoist goods up and down from the quays, but the viaduct signalled the end of Calstock as a port. By 1930 the cost of manning the hoist far outweighed its usefulness and the hoist was eventually sold for scrap in 1934. Meanwhile there was a huge growth in the export of strawberries and flowers to London. 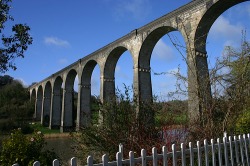