The 1880 Ordnance Survey map shows nine quarries within half a mile of Gunnislake but today only one quarry on the north side of Hingston Down is worked, producing elvan stone for road making and repairs. It was worked from 1924 by the Hingston Down Quarry Co Ltd but was taken over by Amalgamated Roadstone Limited. It was connected to the East Cornwall Mineral Railway and on average twenty 15-ton qagons per day would be despatched. It is now owned by Hanson Aggregates.

Also on the Down was Whiterocks Quarry, later Hingston Down Works which produced setts and roadstone for Charles Bolt & Sons until 1901 and for F.W. Bolt & Co and Jessie Bolt & Co Ltd until 1914. There was also another small quarry, Parish Piece Quarry, which was operated by the Calstock Rural District Council at the beginning of the 20th century.

The Hingston Down granite continues into Devon where granite setts were worked at the two Frementor Quarries. A horsedrawn tramway linked the quarries with Impham Quay on the Tamar.

What is today known as Pearson's quarry opened in 1808. It was advertised for sale in 1826. Edward Storey took over the quarry in 1880 from the Gunnislake Granite Co. He erected buildings for polishing and dressing the granite. The stone was mostly excavated by hand as the quarry was close to the houses and they had to be very careful when blasting. One man would hold a hand drill known as a 'jumper' whilst two others would hit it alternately with a sledgehammer. 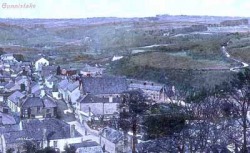 The stone was shaped and polished. In a day a skilled worker could cut ten feet of kerbstone from rough granite weighing nearly a ton or fashion 70 to 80 paving stones. In its heyday the quarry employed 700 people. The quarry yielded hard fine-grained granite which was used in Devonport Dockyard and the fortifications around Plymouth. The quarry was closed in 1896 but in 1898 it was taken over by S. Pearson & Son. They supplied stone for the breakwater in Dover. They built a railway branch to connect with the East Cornwall Mineral Railway and had a quay at the bottom of the incline in Calstock so that the stone could be transported on the Tamar. The locomotive 'Ada' was purchased from the Calstock viaduct contractors. There were lots of sidings in the quarry including one which crossed the main opening on two granite pillars and led to a small quarry to the south known as Hardwall Quarry. This quarry was worked by Thomas Westlake between 1896 and 1902. 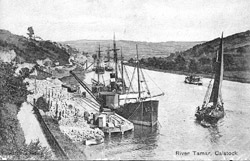 The rails were removed in 1915 and the pillars in 1980 when houses were built on the site. Pearson's employed 200 men, though there were 175 when the quarry closed in 1907. In March 1908 the Cornwall Granite Co Ltd took over the quarry but this lasted for only three years.The quarry was nearly a quarter of a mile wide and 150 feet deep in places.

The workings had to be pumped day and night but there was still a problem with water. Consideration was given to building an adit to drain it into the Tamar, but this idea was killed by the outbreak of the First World War. By this time the quarry had closed and there is now a deep lake there.

There were more than half a dozen quarries in Clitters Wood, Gunnislake, but the largest was Clitters or Wright's Quarry which was originally worked by J. Snowden & Son between 1898 and 1907 and then by W.G. Wright & Co until 1914. 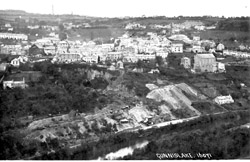 The Tamar Bank Granite Co Ltd on the bank of the River Tamar was advertising in the Cornish Times in 1865 for 30 experienced stone cutters - "liberal wages will be given". However, a report in the Cornish Times in 1866 announced the closure of the works causing great hardship in the area. In February 1868 the granite remaining at the quarry was advertised for sale in order to pay outstanding wages - " about 30 tons of (London Cubes) Pitching, 20 tons of common ditto, 300 feet of kerbs, 10 steps (5 feet x 8 inches) 40 tons of unworked granite". The quarry was being run by The Tamar Granite Co Ltd in 1872. Between 1903 and 1906, J. Snowden & Son of Plymouth worked it for setts and channels. Tozer & Son then worked it until 1920.