Much of the music in the parish began with the singing in the Chapels, and then groups formed to promote their own ideals. The mines set up brass bands and the archive has photographs of these “Bands of Hope” marching through the villages. Harrowbarrow had its own brass band and their band room is still standing, though it now forms part of a private house. Calstock also had its own Town Brass Band, conducted by Bob Preston, who had five of his sons playing in it. Entertainers like him would be called upon on such occasions as the Calstock Regatta, which began in 1873,and used to attract hundreds of spectators on both banks of the river. It once included events such as barge boat racing and diving, but today the river is too muddy for the swimming club to have survived, and the racing is much more regulated. The regatta did not take place for several years after the war, but thanks to local residents such as the late Jim Stacey, it is once more a popular annual event. 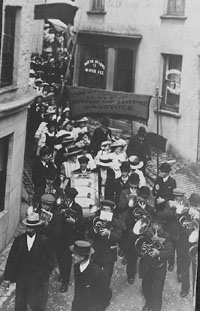 A plaque at St. Andrew’s Church tells us about the bellringers, referring to bells being rung there in 1773, and another inscription describes “The first and complete peal ever rung in the Scientific or Half-pull method on these bells or in the County of Cornwall” by the Calstock Society of Change- ringers, in 1864.
Calstock, Gunnislake and Harrowbarrow all had Male Voice Choirs in the years between the wars.
At Gunnislake, the choir was conducted by Mr. C.B. Millman, and in 1937 they won the Lady Astor Cup at Plymouth guildhall. After the war all the parish men combined to form the Tamar Valley Male Voice Choir conducted by Mr. W. Liverton.  At Gunnislake at Christmastime, Cornish carols would be sung in the square, written by Thomas Merritt. These carols are still sung in parts of Cornwall and also around the world where Cornish people have settled. Harrowbarrow and Metherell were entertained by the Home Guard Carol singers. Later came the Johnny Green singers, who competed on Hughie Green’s “Opportunity Knocks” in the 1950’s. Before the Second World War, the Rich family was very involved in entertainment, as were the Langsfords, who formed the “White Heather” dance band, and the Matthews family who could apparently put on a concert on their own.
At the beginning of the 20th Century local people in Calstock would go guising, or “darkying”, as it became known. They would dress up in funny costumes, blacken their face with burnt cork and walk around the village playing any instrument they could muster to provide some fun in the village. They were sometimes given hot chestnuts, a drink, or maybe a potato cooked in its jacket, but not usually money. The custom has been revived and continues today but so as not to be misunderstood, the custom has reverted to it’s original name of “guising”, and the blackened faces are replaced now with the Cross of St. Piran. 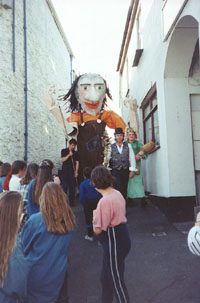 Another village event – the choosing of the Rose Queen – has now been replaced with the procession through Calstock village of the Big Giant. This began about twenty five years ago when the Community Council re-enacted the legend of Tavy and Tamara and this annual event takes place on May Day with the residents of the village parading through the streets to a tune written at the time by William Coleman, which has now become a tradition
“Harrowbarrow bulldogs, Gunnislake tags
Little boys in Calstock, will beat them all to rags”

That is what they used to say, and there has always been rivalry between the villages, usually apparent on the sports field. The archive has photographs of cricket and football teams from all the villages in the area, although most of these have disbanded. Chilsworthy, Latchley, Harrowbarrow and Metherell used to have teams, but the most competitive events now are the Village Flower shows.

We have hundreds of photos in the Archive, call in and see  for yourself - there might even be a picture of you!